At the car show in Geneva Audi just revealed their newest concept: the Q4 e-tron.

PLATFORM
This fully electric car has two motors delivering a total power output of 225kW (300HP) and 460Nm torque. As expected the car will come with Audi’s renowned quattro all-wheel-drive system. The Q4 e-tron will use the MEB-platform from it’s sister-company Volkswagen. The same platform will be used for the upcoming Volkswagen ID which will be on sale early 2020.

BATTERY
This Q4 is designed to be a top tier mid-sized SUV but with the interior roominess of cars from a higher segment. The car’s battery capacity of 82Kwh, the largest battery compatible with the MEB system at present, takes up almost the entire space in the underbody area between the axles (wheelbase: 2.77m) weighing a total of 510kg. The battery can be charged at 125kW, enabling an 80 percent top-up in just half an hour. With an estimated WLTP range of 450km (280miles), it slightly outperforms the 2019 Audi e-tron 55 quattro.

PERFORMANCE
The Q4 e-tron will do 0-100kph (0-62mph) in 6.3 seconds and its top speed is electronically limited to 180kph (111mph). The rear motor is used for normal driving (efficiency mode) while the front motor comes into play under hard acceleration or low traction.

EXTERIOR
Design wise the concept SHOULD be fairly close to the production version. As it is the Q4 e-tron concept features elements from the e-tron 55 quattro (like a full-width LED taillight and slim, high placed headlights) as well as distinctive shoulders and the well known Audi front grill.

INTERIOR
The interior has been updated with a new version of Audi’s virtual cockpit and a 12.3″ touchscreen infotainment system which seems to be inspired by the Audi e-tron GT concept. This concept is a 4-seater but the production version early 2021 will offer room for 5 persons. The Q4’s main competitor will be the upcoming Model Y.

EV-01 fully prepped! #audietron #typhoongrey #xpelstealth #etronxpelstealth
Waiting for the Thalys at Antwerp Central. Heading to Rotterdam to pick up my car...
Work in progress...
EV-01 waiting for some TLC... Mod nr. 2. ✅ 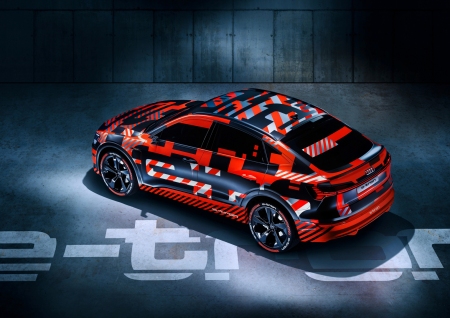