How do aerodynamics influence an electric car’s range?

One thing was of central importance in developing the Audi e-tron: the aerodynamics. Aerodynamics development manager Moni Islam explains why this is more important for the range of an electric car than the actual weight.

How big a challenge did you and your team face when developing the aerodynamics of the first Audi electric vehicle?

Moni Islam: It was a huge challenge. After all, the Audi e-tron prototype is our brand’s first fully electric production model. And that’s why we ourselves made a point of stating in the product specifications that it should be the most aerodynamic Audi model of all time in this vehicle class. As a team, we had to bring all our knowledge and skills into this project and put in one or two night shifts along the way.

In terms of developing aerodynamics, how does an electric car differ from a vehicle with a combustion engine?

Our job becomes more challenging. Because good aerodynamics and low air resistance are even more important for electric cars. Essentially, you have significantly less energy available overall than you do with vehicles powered by a combustion engine. So we need to optimize efficiency in every area. And one area, in particular, is air resistance in constant driving conditions at a constant speed, such as on freeways. We need to offer our customers an electric SUV with a good range.

Do aerodynamics engineers now have more influence on the development of electric cars?

Yes, I think they do, absolutely. And that’s because aerodynamics play a crucial role in determining the range of an electric car. After all, the energy used to overcome air resistance cannot be recovered – unlike with vehicle acceleration.
In town, a heavy electric car is also efficient because it can recover a large part of the energy, which it uses to accelerate when running up to the next red traffic light. The situation is, however, totally different on long journeys where the Audi e-tron prototype is perfectly at home: Here from speeds of around 70 km/h (43.5 mph) the rolling resistance and the inertia take second place to aerodynamic drag irrespective of the type of car.
The energy required to overcome that drag is lost. That’s why clever aerodynamics measures are so important for the Audi e-tron prototype for ensuring high efficiency and thus a reach suitable for long-haul routes.

Which areas of an electric vehicle offer more design and development freedom compared to a conventional vehicle?

Thanks to their large battery, electric vehicles have an enclosed and very smooth underfloor. This is the dream of every aerodynamics engineer and a huge advantage for us in development. We could have just left it at that. But we didn’t. On the contrary: We’ve done all we can to make the shape of the body as streamlined as possible. And we’ve also incorporated a new feature. The Audi e-tron prototype is the first Audi production model with an enclosed air flow which is guided through the entire front end and back out through the underfloor. No combustion-engined model has that yet.

For you personally, what’s the most important component for the aerodynamics of the Audi e-tron?

For me, it’s the virtual exterior mirror – without a doubt. And not just because it helps to improve the aerodynamics significantly, but because it’s also symbolic. It heralds a new generation of vehicle development – one with completely different approaches.

Who had the idea – was it your team or your colleagues from design?

For years, aerodynamics engineers have looked forward to the day when it would be possible to dispense with exterior mirrors. The virtual exterior mirror concept for the Audi e-tron prototype was decided on relatively early on in the process. But who ultimately had the final idea, I can’t say. But it’s not important. What is important is that this design detail brings a 5-point advantage in terms of cd and extends the electric car’s range by around 2.5 kilometers (1.6 mi).

Thanks to the sophisticated aerodynamics the Audi e-tron prototype has a top cd-value. How does this benefit the customer?

With electric cars, the cd-value plays a vital role in determining the range. That’s a crucial factor for our customers. The Audi e-tron prototype is better than a conventional SUV of comparable size by just under 70 cd points – in terms of range, that’s a gain of around 35 kilometers (21.7 mi).

When did you and your team start development work on the aerodynamics of the Audi e-tron prototype?

Very early on – back in 2013. We were involved right from the initial concept, analyzing the initial drafts alongside the designers and testing the first models in the wind tunnel.

With the standard exterior mirrors, the Audi e-tron reaches a drag coefficient of 0.28, with the optional virtual exterior mirrors even 0.27 – a top rating in the SUV Segment. The highly developed aerodynamics provide a big of the car’s areas. 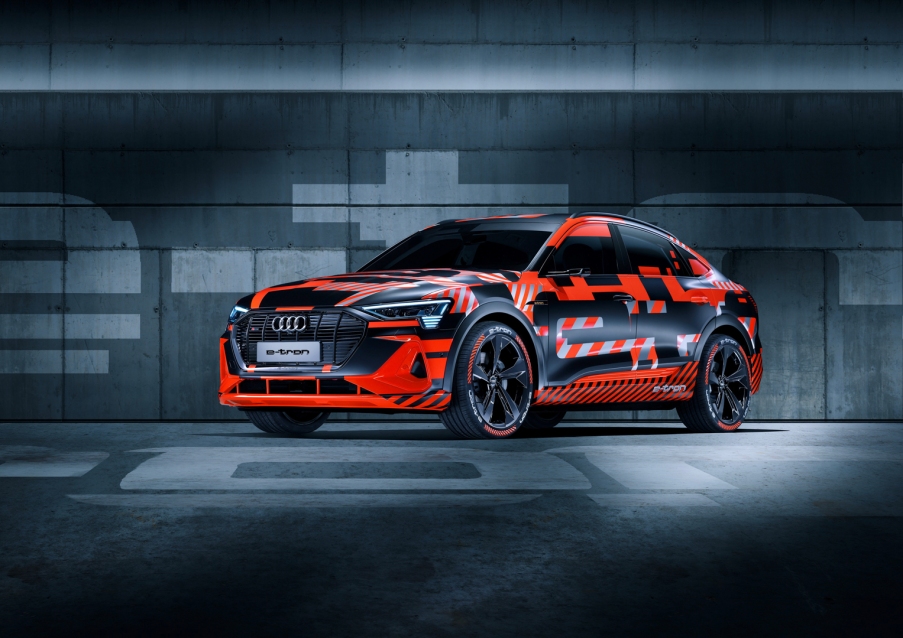